So there is a point where you realize you just can’t tell the whole story on Facebook, so I decided to resurrect the blog. Yeh – been a while, leave it alone.

Funny how many people like watching our house projects – sorry I haven’t posted this yet. Two weeks ago I took a 3 day weekend and knocked out a number of projects around the house – namely cause I rented a fun 18,000lb mini-x. (yes it is as fun as it looks)

Let me quickly setup the goals as there are a number of projects we have going on. My wife fusses at me all the time because of this world of “serial dependancies” I live in… When they charge you 1800.00 for a week of the man toy, you want to get as much use out of it as possible.

Well Crap…
As with any machine or tool, things take maintenance. They usually break when you go to use them. Both the gator and the Bobcat have hydraulic issues which took custom hoses to get fixed. The Gator’s oil cooler has rusted so I decided to bypass it for now (to fix later).

When the hydraulics don’t work – you have to manually lift the bed to fix them.. yeh thanks for having a larger machine around…

The Bobcat’s 4in1 bucket had a leak in the top lines – those had to get replaced too. After a trip to Napa (for the custom made hoses) and a few busted knuckles later we were back in business. Now we can think about getting busy.. 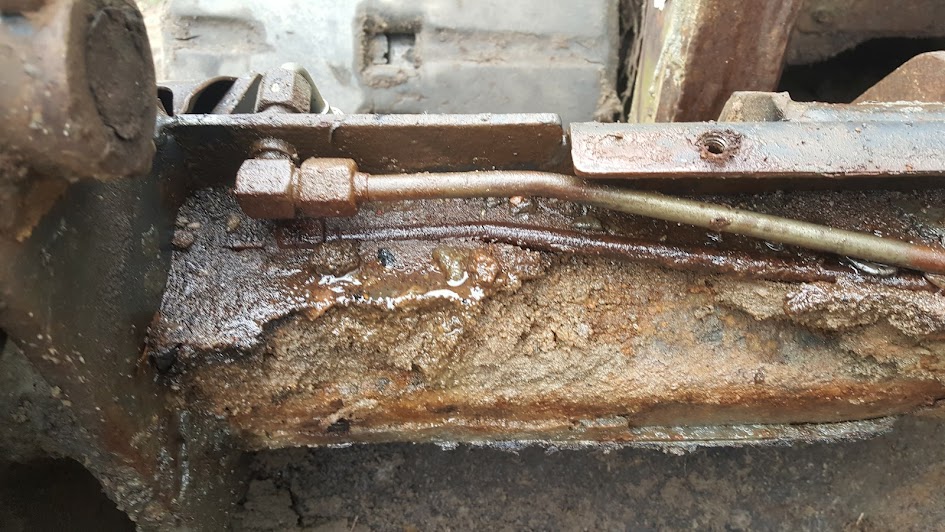 Wed is Delivery Day…
So after planning all this out, we had to get the materials to get it done. Talk about feeling like Christmas! 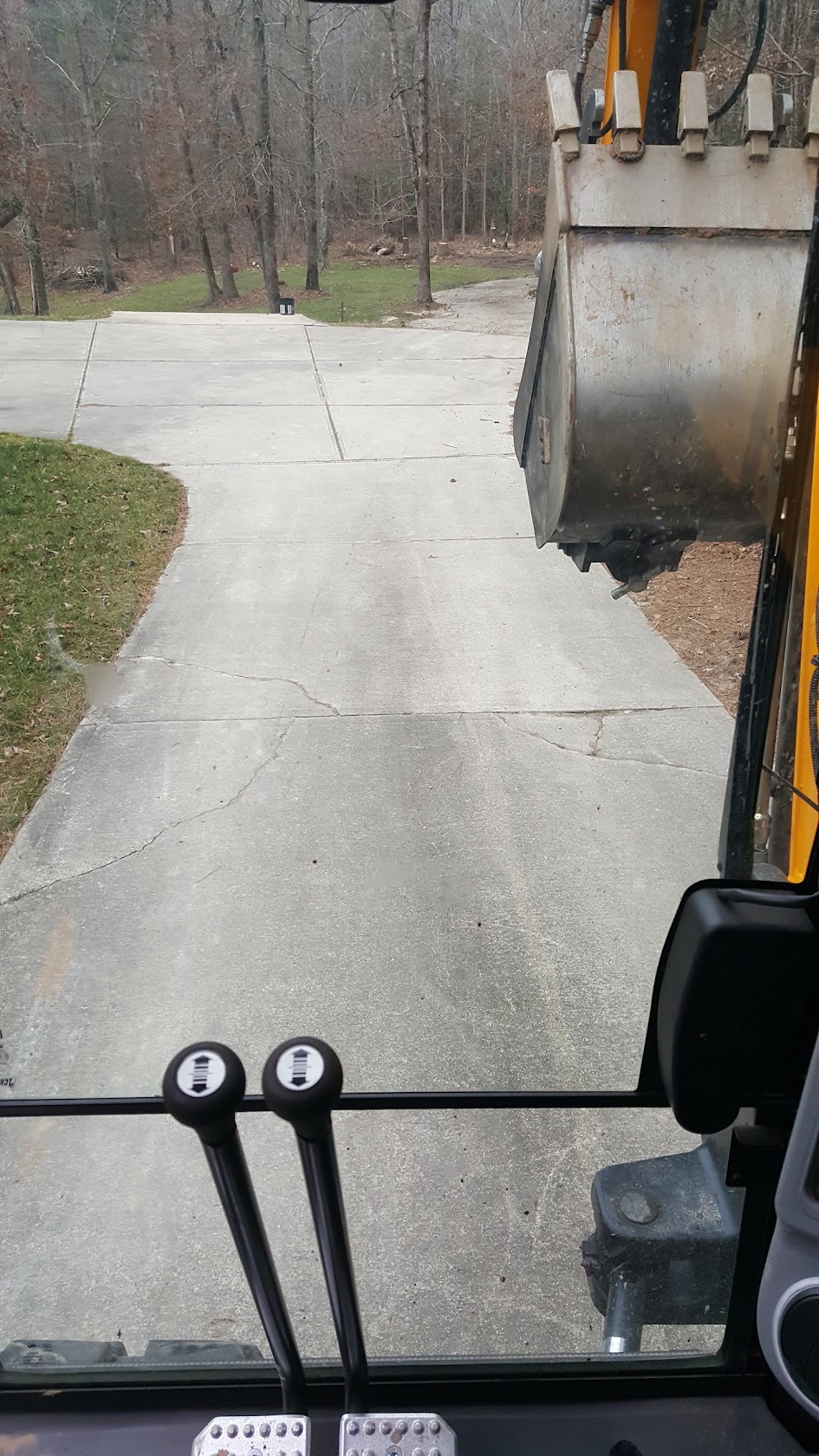 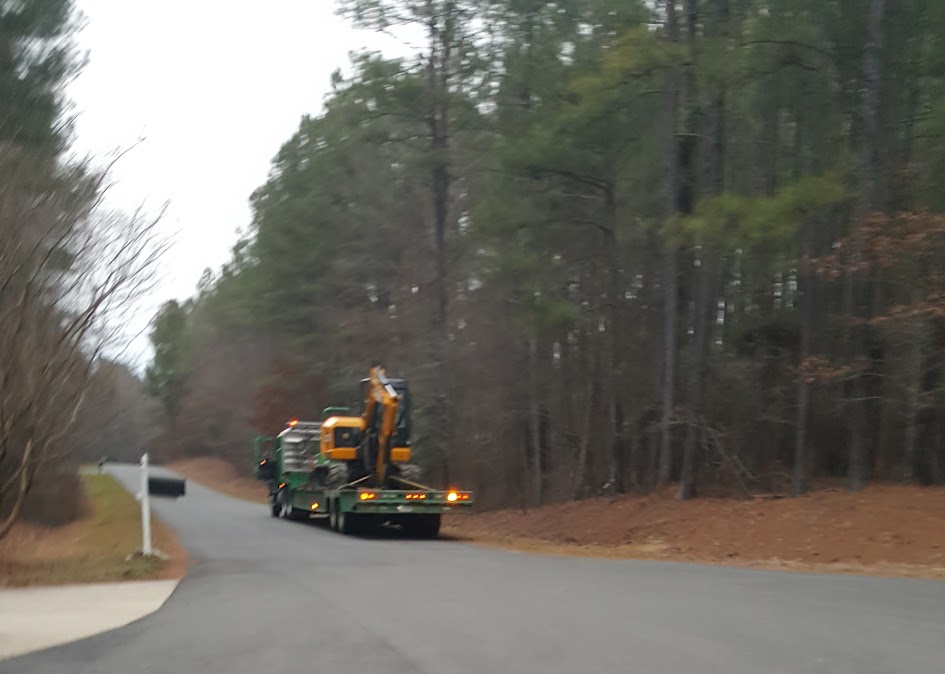 11am They delivered 42,000lbs of Spring Lake Boulders 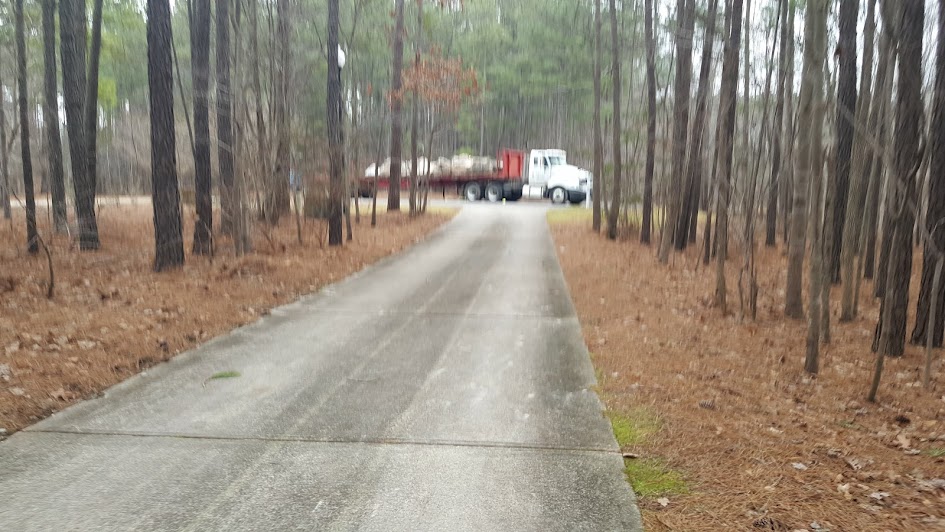 Forks
With these pallets weighing anywhere from 2000 to 3400lbs I needed forks for the Bobcat as well to get things moved to the right areas. My brother brought those down that afternoon as well 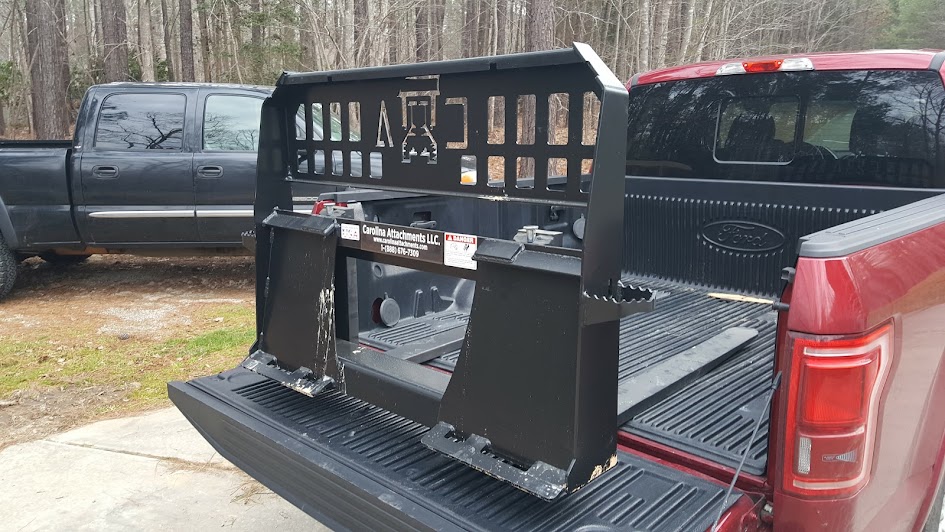 Needless to say it was hard to focus on work from here forward…but I did! 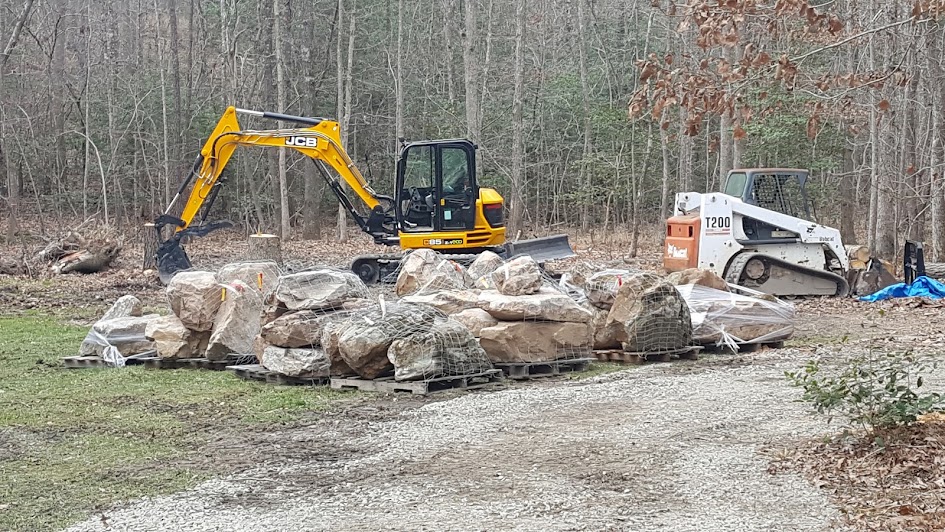 LATE Wed Night
Okay – so by the time I finished my last conference call at 5:30pm I couldn’t help..decided to go dig a little…

To start, lets talk about the building (yes, I know you want to get to the videos). You can read more here (Building a Building), but we’re clearing a 60×60 area for the building. We’ve already cut and split most of the trees but there are massive stumps we need to dig out and the Bobcat simply isn’t strong enough to break them loose (surprising I know). So the thought was, Bobcat weights ~8000lbs vs the mini-x is 18000lbs = Lots more digging power. Yeh, well stumps are tough boogers. Here is what we started with:

It took a bit of maneuvering to get those guys out. I started late in the evening and got most of them take care of thanks to the lights. 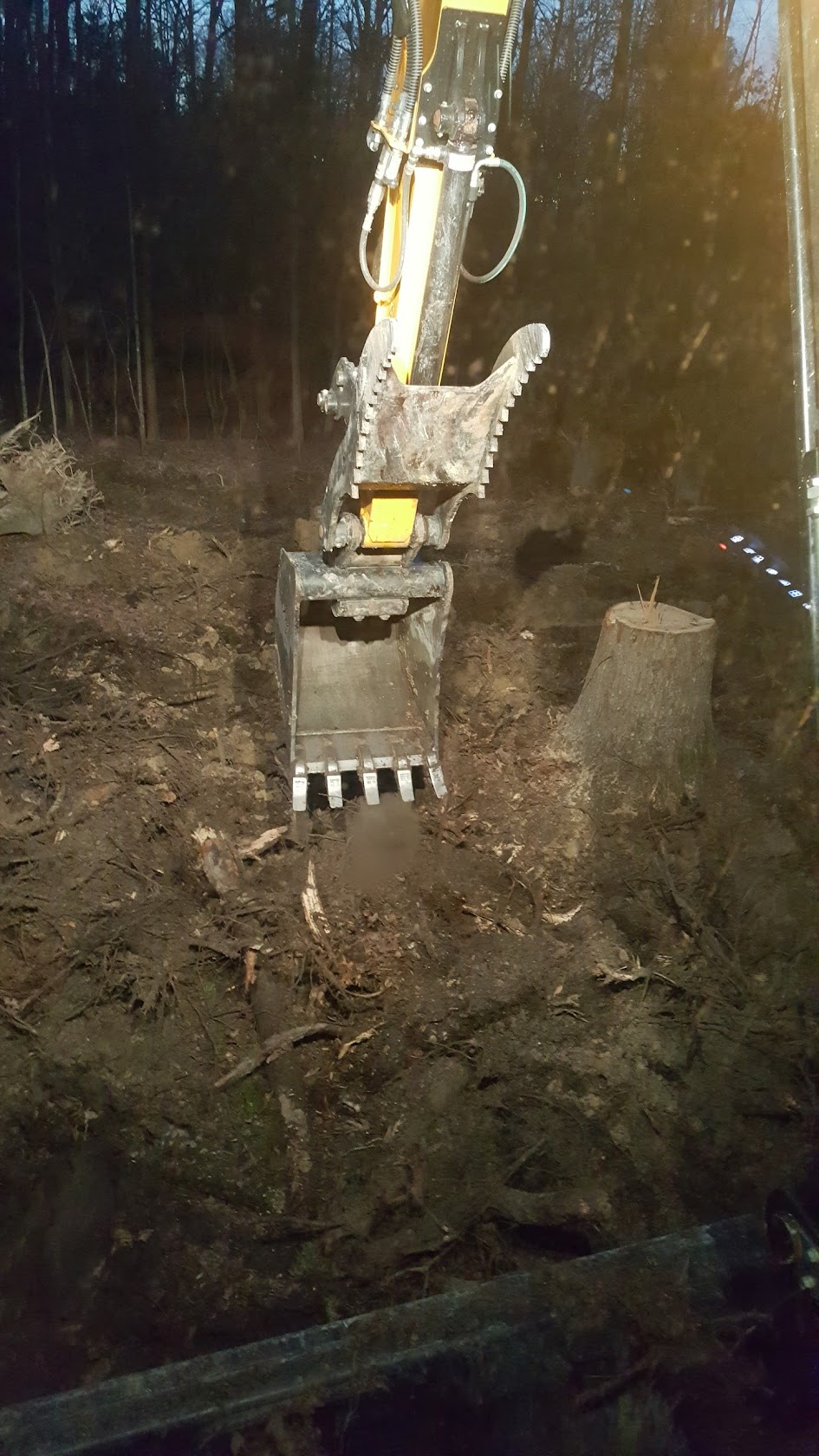 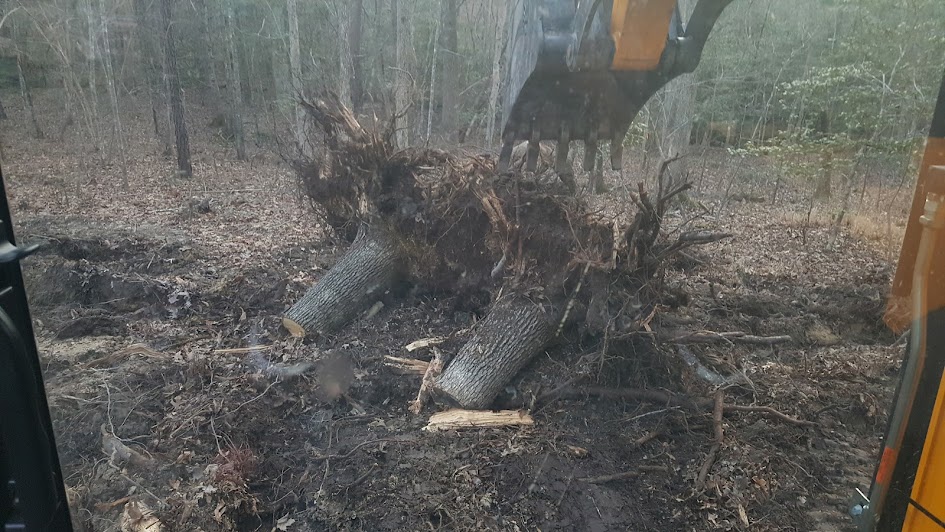 Thursday
I got up early and started pressing through my inbox and another full calendar of calls. Let me pause here and tell you it takes a massive amount of maturity and dedication not to just disappear throughout the day. My passion for working at Nutanix actually outweighed my caveman instinct to go move earth.

I did walk down every couple of hours to work on the Bobcat yet again – the 4in1 bucket wouldn’t come off because the release pins were frozen in rust. A can of Liquid wrench and some persuasion from a 2 lb hammer finally fixed the problem. 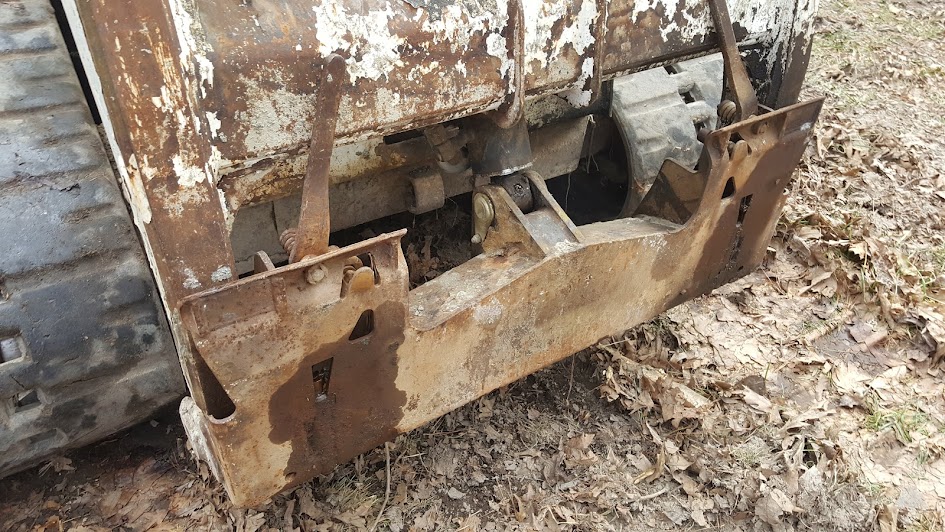 By 4:45 I couldn’t help it anymore – I thought at least I’d go prep for a full Friday. Being a nerd, and knowing people like this stuff, I decided to use the GoPro to time-lapse this entire adventure.

So lets review why I’m even worried about this. As you can see in the video above, this is a rather tame little creek. There are even points in the summer where it will stop running and become a little stagnant. However, when we get strong rains it can easily rise 4-5ft feet creating our own white-water rapids in the back.

Over the couple years that we’ve bene here, the bank has continued to erode and fall in. We considered something cheaper like riprap, but given its a focal area from every room in the back of the house we thought we’d dress it up a bit. This will tie into some bigger plans we have for the back yard in general.

With some basic work completed and the boulders and gravel staged, I went to bed ready to start early Friday morning!

Friday
I woke up bright and early to start back on the project. My dad was coming down from Greensboro about 9am and my brother was going to show up after lunch. Sometimes you just need another man to talk through thing with and to make sure you don’t end up in the creek.

We got a good bit of work done during the morning. There was a good big of learning involved as we found a good bit of bedrock in the bottom of the creek but mud on the to created a slippery base.

We repositioned after lunch to start working on the steeper part of the bank. While I picked up a decent amount of skill on the controls of the mini-x, my brother has a lot more experience than I do. I wanted to make sure he helped me with the more difficult areas while he was around.

Saturday
My good buddy Matt had agreed to come over Saturday to help with some tree work and the rest of the hard items. With over two thirds of the creek bank work complete, I decided to focus on the trees, stumps and other items while I had his time.

I wanted to be careful cutting the large pine by the house. While we were both sure that we could probably get it to fall the right direction, the well, house, and raised garden were all targets in range of the large Pine. Matt brought all his climbing gear so we could make sure we got a rope high enough in the tree to ensure we could pull in the right direction. 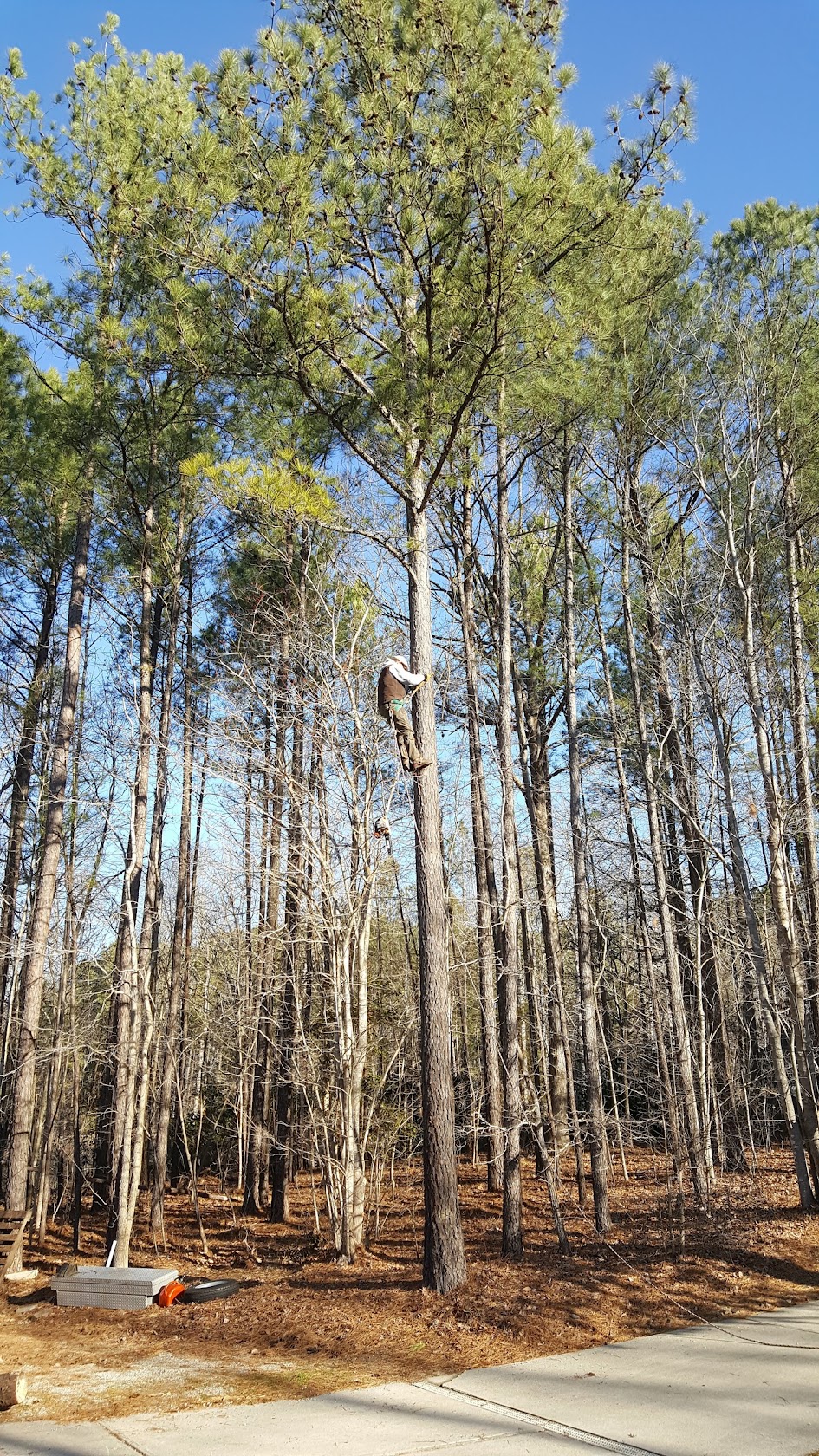 We laid some previously cut logs across the driveway to protect it from the impact and tied the other end of the rope to the Bobcat. The tree landed within a couple of inches of where we had planned. During our discussions, Matt remembered that I wanted to build a new bridge over the back of creek and suggested we cut that tree to become the base supports. It was sawed into two 22′ sections and used the mini-x to move those down to back of the creek. Once done, we cut a couple ofter trees in the back of the parking area and cooked some burgers for lunch.

With the tree’s out of the way we used an hour or two to finish getting the stumps out of the ground and piled up. Part of the struggle is that those stumps are so big even the mini-x couldn’t move them. Matt and used to the Bobcat and the mini-x in tandem to split apart the larger stumps. 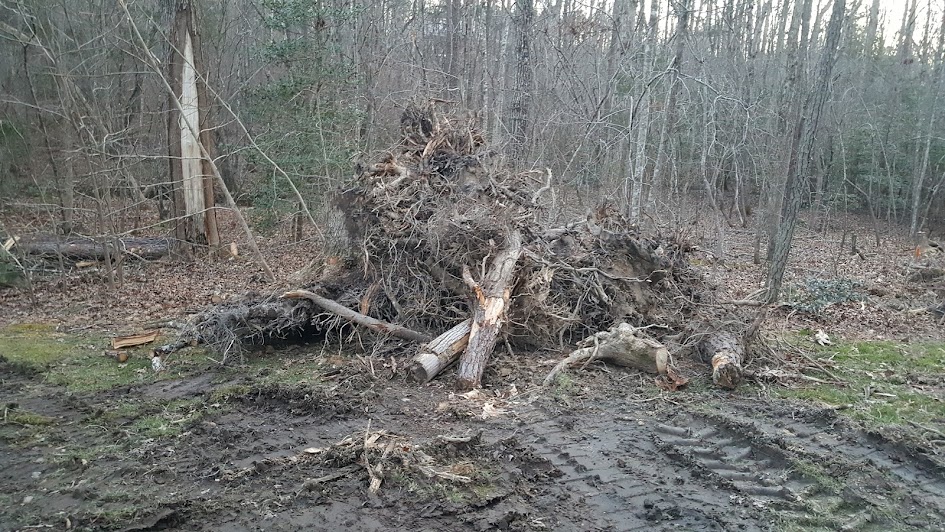 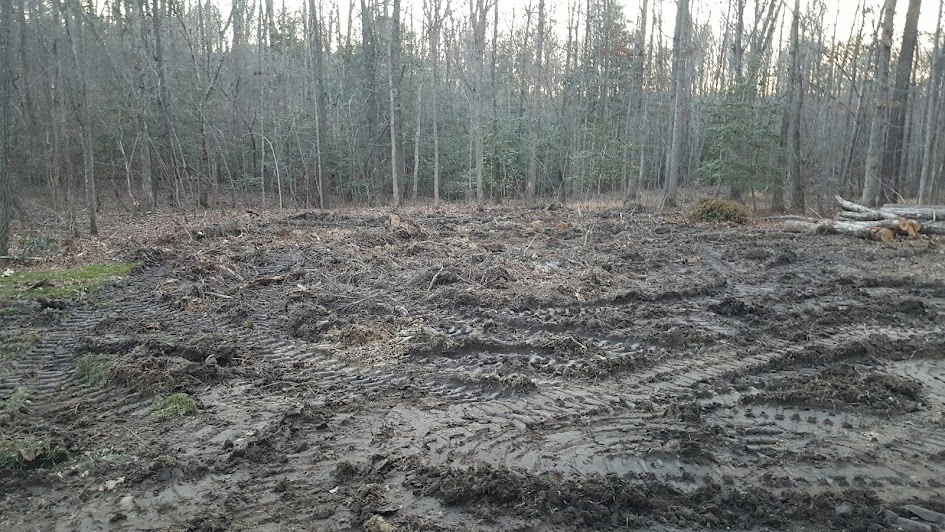 We then turned our attention back to the creek, needing to make sure I could all the work done before having to turn the mini-x back in on Monday.

Needless to say, it didn’t take me long to fall asleep that evening.

Sunday
I’ll admit, I streamed church on the TV Sunday morning, knowing I still had a good bit of work to get completed. I started back shortly after the 8am service wrapped up and worked on the last couple areas of the creek that needed some attention. There were a number of “pretty rocks” Lyndsey wanted placed where they would be seen. She came out and helped me place the last 10 or so.

Once, completed I needed to go dig out the stump of the large Pine Matt and I had cut the day before. I thought it would be a simple 20min job and 2 hours later I had finally removed the beast from the ground. To this day, its one of the largest Pine stumps I’ve ever seen. 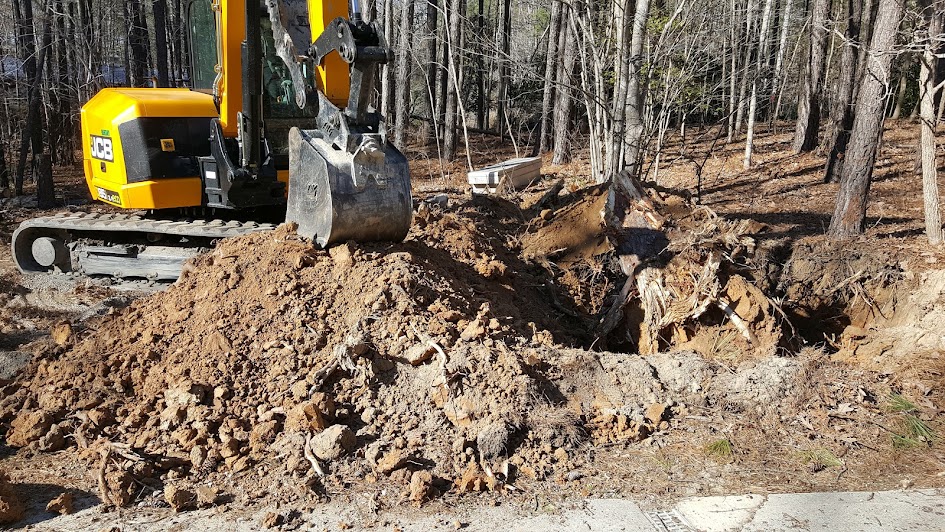 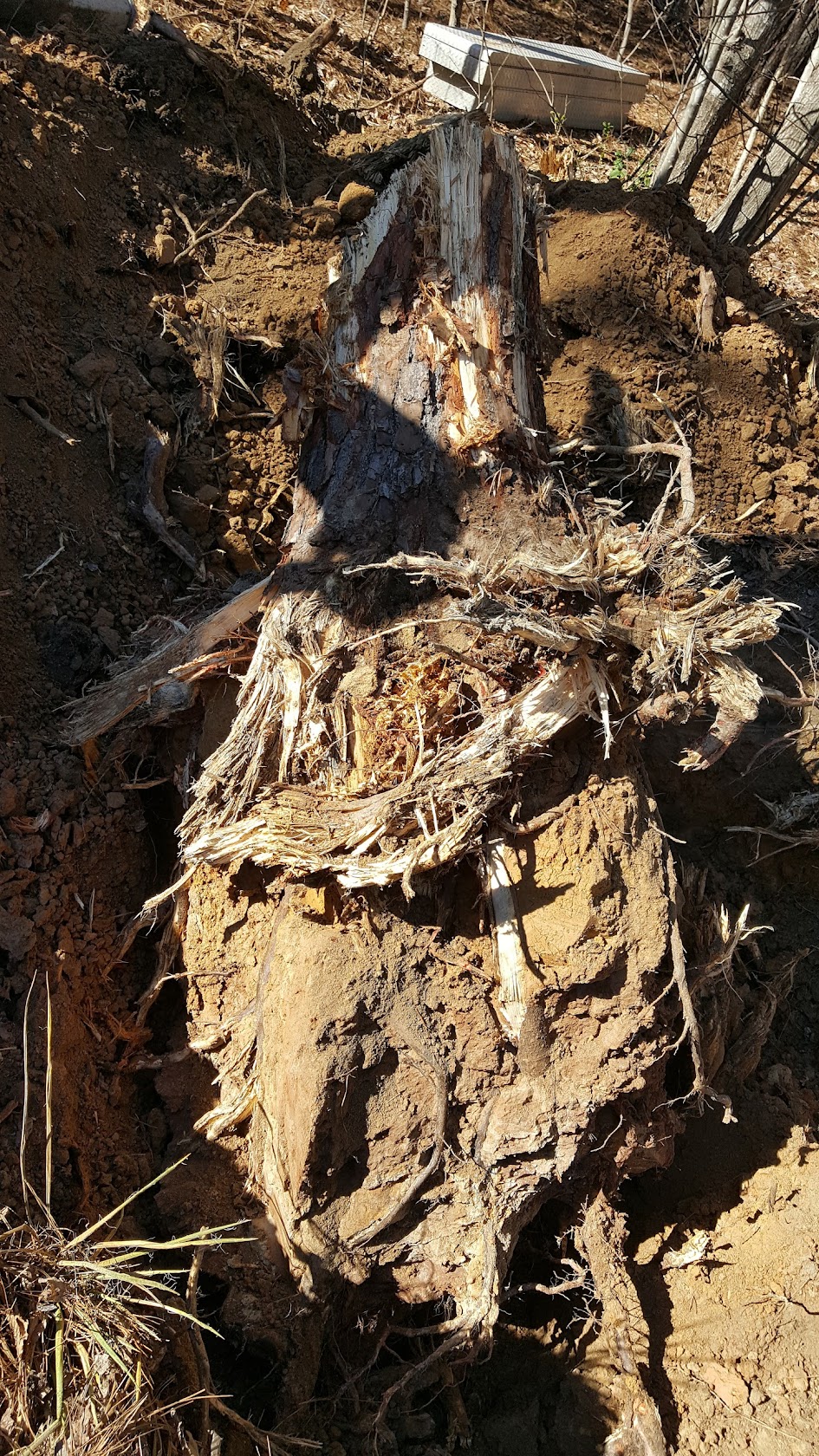 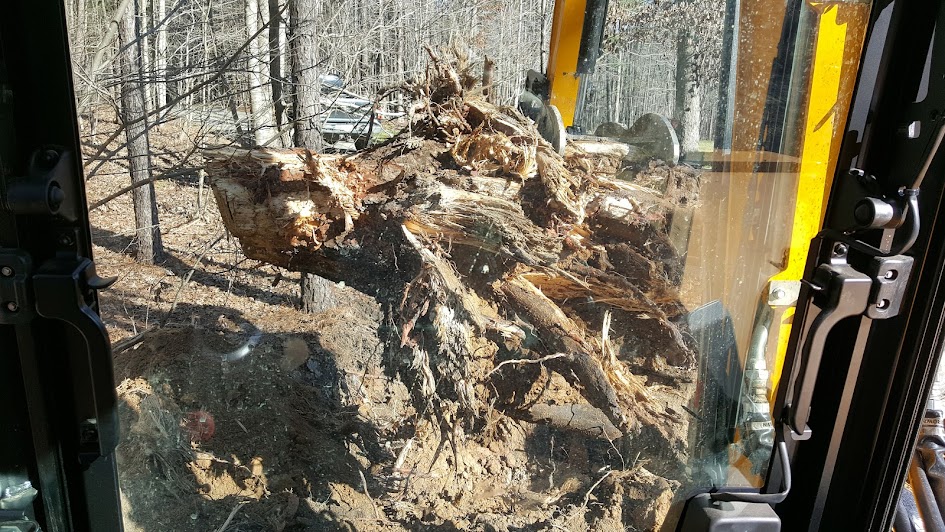 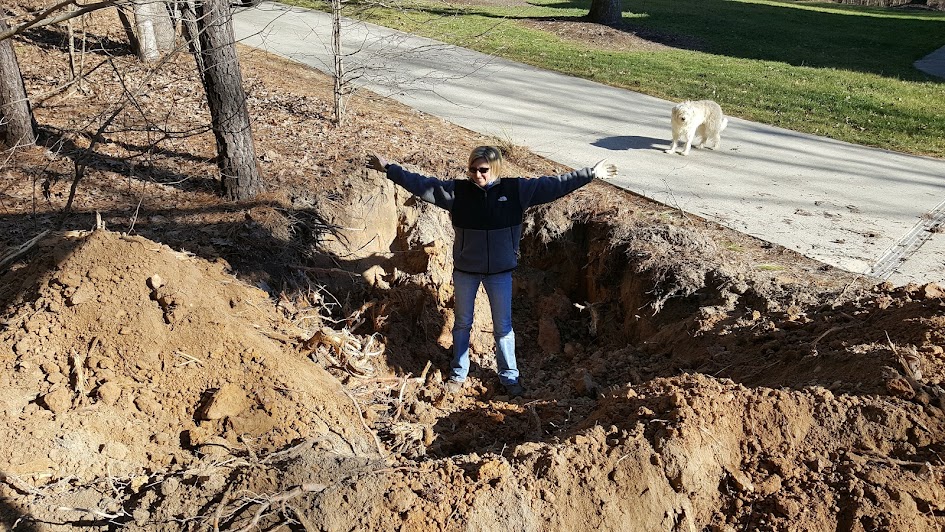 With the stump out, I backfilled the hole and packed the area down well using the weight of the excavator. Use the Bobcat and the Gator we moved the rest of the gravel to the parking area and spread/packed it down. 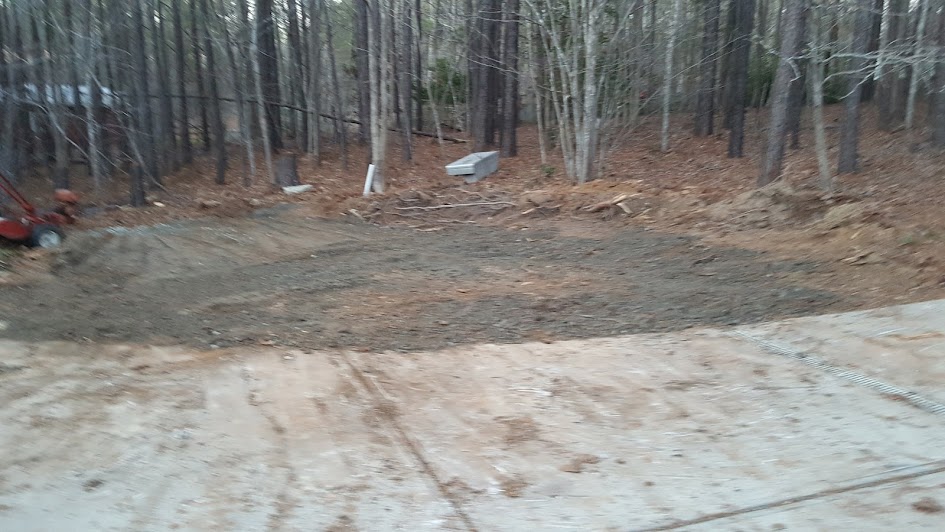 We saved a few of the nicer/moss covered boulders to use as decorative items for the flowerbeds (See Creating new Beds). We used the mini-x to get them in the back of the Gator (maxed out weight capacity). I thought I could easily “dump” the boulder out of the bed – yeh that didn’t work so well. It ended up rolling out of the bed and flipping on the wrong side of what we wanted. We had to use tow straps and pull it back over with the Gator. 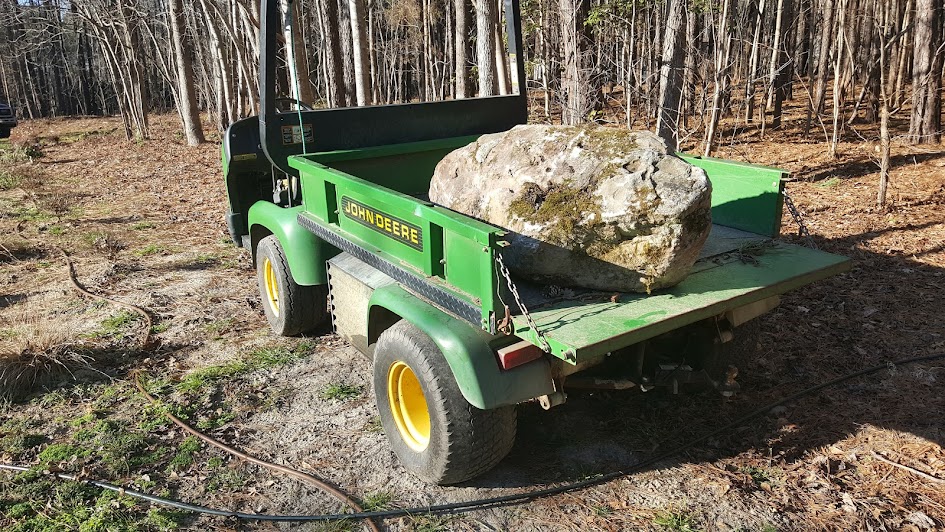 Wrapping it all Up
After a very long weekend of work, we ended up tackling everything that was on the list. While there is still a big of grading, backfill, and clean-up to complete we finished the day proud of what we had completed. 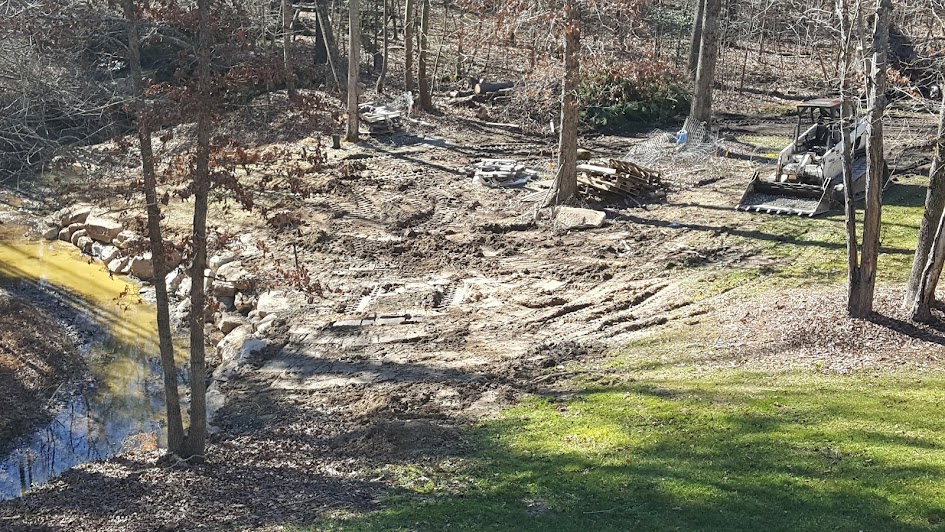 We’re going to use some of the dirt we’ll excavate from the garage area to flatten out the yard above the creek bank but we got everything back into place and packed down.

For our first serious stone project, we think it turned out really well. We’ll know over the coming months and years whether it continues to stand. We’re going to add a flower bed and plant some trees along the edge of the wall and we’ll have grass seeded by early March.

Why Life on a Dirt Road?

While I don't really live on a dirt road,I often do in my mind. While I love my job, my friends, and my church, there is a deep calling to stay connected with nature. I don't judge - some people love their streetlights and concrete, but I need balance. This blog has a collection of things I've build, projects tackled, moments I want to remember, and thoughts I figured I might share.

With Google+ plugin by Geoff Janes and Thorsten Hake